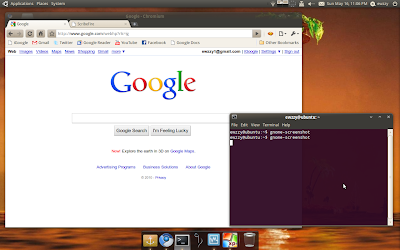 I've been playing with the latest version of Ubuntu (10.04 Lucid Lynx) and it's pretty great. I've played with every version of Ubuntu since Breezy Badger back in 2005. The big difference with this one is that have had to do basically nothing to get it working. I had to install the wireless drivers (a real hassle to do without an internet connection) but that was about it.
Thing is, that was my favorite part of installing Ubuntu. It took a little bit work but it was so much fun to customize. Now everything is already set up exactly like it should be. What is a geek to do? Oh well, in the end I'll probably go back to using Windows just because Ubuntu can't run Photoshop natively. Such is the life of a graphic designer.
Posted by Ewzzy at 11:16 PM