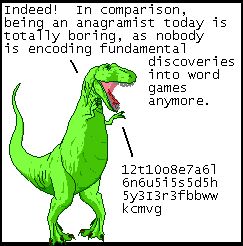 I spent quite some time yesterday trying to solve the Dinosaur Comics anagram puzzle. Read here for details. The gist is that 12t10o8e7a6l6n6u5i5s5d5h5y3Ir3fbbwwkcmvg contains a coded message. The numbers represent the frequency of the following letter in the answer, so their are 12 t in the puzzle. Expanded we have:

Important to note is that the capital I's at the end are different from the lower case I's before them. We have a few other clues.

I believe that it isn't impossible to create a program that takes into account T-Rex's common phrases (there are many) and can brute force a solution. Freely available anagram solvers have a time limit in seconds before giving up. If we had a couple of hours with one it could conceivably give us a workable solution.

The real problem is that there are multiple solutions that seem viable. When I started yesterday it before many clues were revealed. I produced the following.

After realizing that it couldn't fit with the newly revealed 5y clue, I tweeted my solution to Ryan North, creator of Dinosaur Comics, who replied: 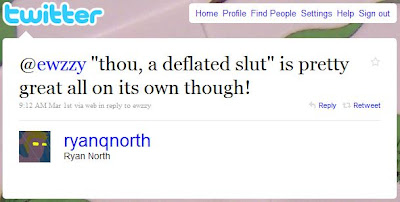 I decided to just add "YYYYY!" at the end. That's the sound the crowd made when they heard my massive put down.
I then tried to trick him with this:

@ryanqnorth I solved it but I didn't want anyone to steal my answer so I re-encoded it. 12t10o8e7a6l6n6u5i5s5d5h5y3Ir3fbbwwkcmvg

Naturally since there is only one way to encode a given message that would work and he should be able to decrypt and confirm my answer. He thought it was funny and re-tweeted it. I’m not gonna lie. Any interaction with my internet heroes feels so awesome. It’s why I have twitter. (originally it was cause a girlfriend told me to)

Back into how to solve it. I found an anagram tool that can help. It’s called Anagram Master and it can give you a list of words that can be made from a given string. You then have to select a word to pull out and then search with the remaining string. It’s incredibly useful but it’s kind of a wild goose chase. In 30 seconds it can find 15,335 words larger than 9 letters that could be in it. Maybe 5 of those actually are. It takes much longer to find all possible words and unfortunately you can’t specify 11 letters specifically. It’s a great tool but again, it can’t just give use the answer. It’s mostly how I got my weird old-timey smack talk answer.

In all due seriousness the first word is likely “Also” and here is why:

The only problem with this is that some people believe that the three capital I’s are the only capital letters in the puzzle. The first word is likely “I” if that’s true. I asked Ryan North about that but he hasn’t replied.

I’ll post more information about the solution as it becomes available.