If you read this blog you'll note my love of Photoshop. There are few problems that it can't solve. What you likely don't know is how the love story began. In 2002 Irrational Games released Freedom Force for the PC. The game allowed for skinning of the character models to create your own heroes. The immediate use of this was to put Batman and Spider-Man in the game. I used my school's copy of Photoshop to join in on the fun. 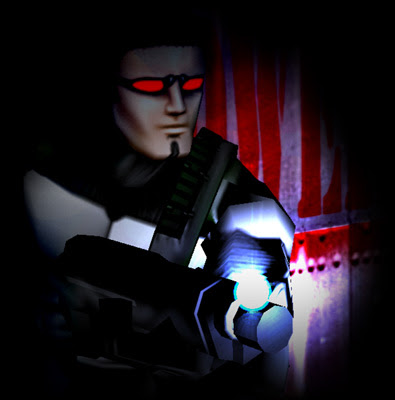 So I'm going to spend the next week or so walking you through my work as skinner for Freedom Force. These are some of my earliest works in Photoshop and will likely shame me for how bad they were.

That guy to the left is supposed to be me. Everybody made avatars of themselves for the game and I was a black-ops guy with the ability to see just one second into the future. Just long enough to dodge a bullet. At night in dreams the power was stronger and would allow him to see into more far flung futures.

You can tell I spent a lot of time figuring out this guy. I went through about 13 different iterations before this one. The others were mostly gangsters in zoot suits.