I'm back with more Freedom Force fun for all my fantastic friends and rambunctious readers. This round is made up of what I believe to be the villains who fought against the ever-vigilant Ewzzy. It's hard to remember on account of my creating them when I was still in high school.

This is "Coda" You can tell by the musical marker on his chest. I'm pretty sure I just thought the symbol and word was cool. No worthwhile significance. I have also no earthly idea what his power may have been but his left side is made of metal. His head being somewhat rusted, I can tell I just threw some textures on him and called it a day. I'm glad I got all the lens flares out of my system when I did. Now I know never to use them. 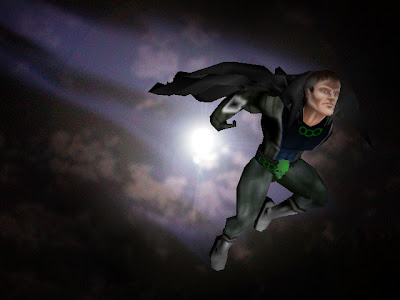 This guy is Demagogue named for Demagogy the strategy for gaining political power by appealing to the prejudices, emotions, fears and expectations of the public. How that relates to his ability to fly and wear skulls I certainly don't know. I do know that this skin is based on the character model for Spawn. He was supposed to be the insidious main villain to face off against Ewzzy but I never really delved into what he could do. I know that he lead the other guys on this page but that's probably about it. 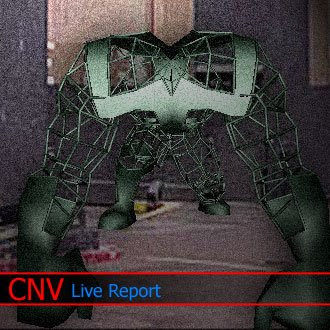 This is one of Demagogue's drones. I didn't actually skin this. The character model didn't have any texture mapping and was actually just a black wireframe mesh. I used a hex editor to change the values of the character model and remove the head and change the color to a shiny green. If you know what that means then you win the no-prise. If you don't then I'm sorry that I confused you. 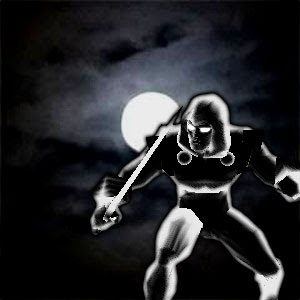 That stealthy fellow under the moon  is Eclipse. He's another example of a barely skinned hack. What a terrible way to start the week. He is actually a reflection map designed to make the black and white shift depending on how you look at him. It's a really cool effect in motion. Too bad there isn't a way for me to show you that. Sorry. As a character I can tell you that his clothing weapons and armor are all made of the same shape-shifting material. Eclipse uses this ability to hide a vast array of weapons to keep Ewzzy on his toes.